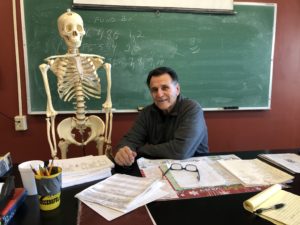 When Tony Congemi started teaching at Cardinal Mooney in 1970, the school had only been in existence for 14 years. So, while people like Don Bucci (former football coach and current athletic director) and Denny Barrett (former football and speech & debate coach) helped lay the groundwork for the school’s tradition of excellence, Congemi had the unique opportunity to learn and be a cornerstone of Mooney’s legacy.

“It’s like any academic or athletic program … you have to create the right culture,” Congemi said. “The administration, faculty, and students have always worked to create that culture of success here at Mooney, and I’m honored to be a part of it.”

Congemi immediately contributed building blocks to Cardinal Mooney’s tradition in athletics and in the classroom. As a football coach, he was there at the very start of Mooney’s championship history. “One of the most memorable parts of this experience to me was being a part of the first four state championships we won in football,” Congemi, who coached running backs and defensive backs through the 1988 season. “I’ll never forget the memories we created with all of those players and coaches that made those titles possible.”

Before the playoff era in Ohio high school football, Congemi helped lead the Cardinals to a 10-0 season in 1971.

“That year was so special to me,” he said. “I still talk to the guys from that team.”

For Congemi, though, watching the students’ hard work in the classroom payoff after high school has been just as special.

“Being an anatomy and biology teacher, it’s been very rewarding to watch former students go off and do great things in the medical field,” he said. “There are a lot of things you can do to make more money, but that’s the real payoff — watching the students succeed at that level.”

That success has an even more personal element to Congemi.

“The best thing though is being able to be here when four of my children went through Cardinal Mooney,” he said. “That what this school is all about — family.”

In 2005, Congemi was elected to the Cardinal Mooney Hall of Fame. Years later in 2019, he was welcomed into the Hall of Fame at Ursuline High School, where he played football and baseball.

He went on to graduate from Youngstown State University, where he played football.

In a career that will span six decades, Congemi doesn’t see a future where he isn’t teaching any time soon.

“I love teaching, and coming to work every day,” he said. “The students definitely keep me young, but the most important thing, again, is the family atmosphere here at Cardinal Mooney. It’s really what makes this school so special.”